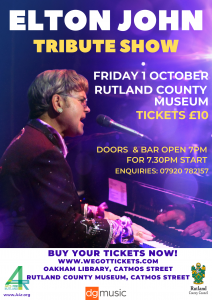 This Elton John tribute will blow you away. Not only does Paul sound like Elton, he looks like him and is a life-long fan!

Based in London Paul has been performing Elton’s songs since the early 1980s and has taken his act all over the UK for festivals, coroporate events, weddings, and various music venues.

Elton’s huge back catalogue means that Paul is suitable for a variety of occasions. Playing Elton’s slower numbers for say during dinner or kick it up with faster numbers like Crocodile Rock, Saturday Night’s Alright etc. to get people dancing. Even some Lion King for the younger ones!